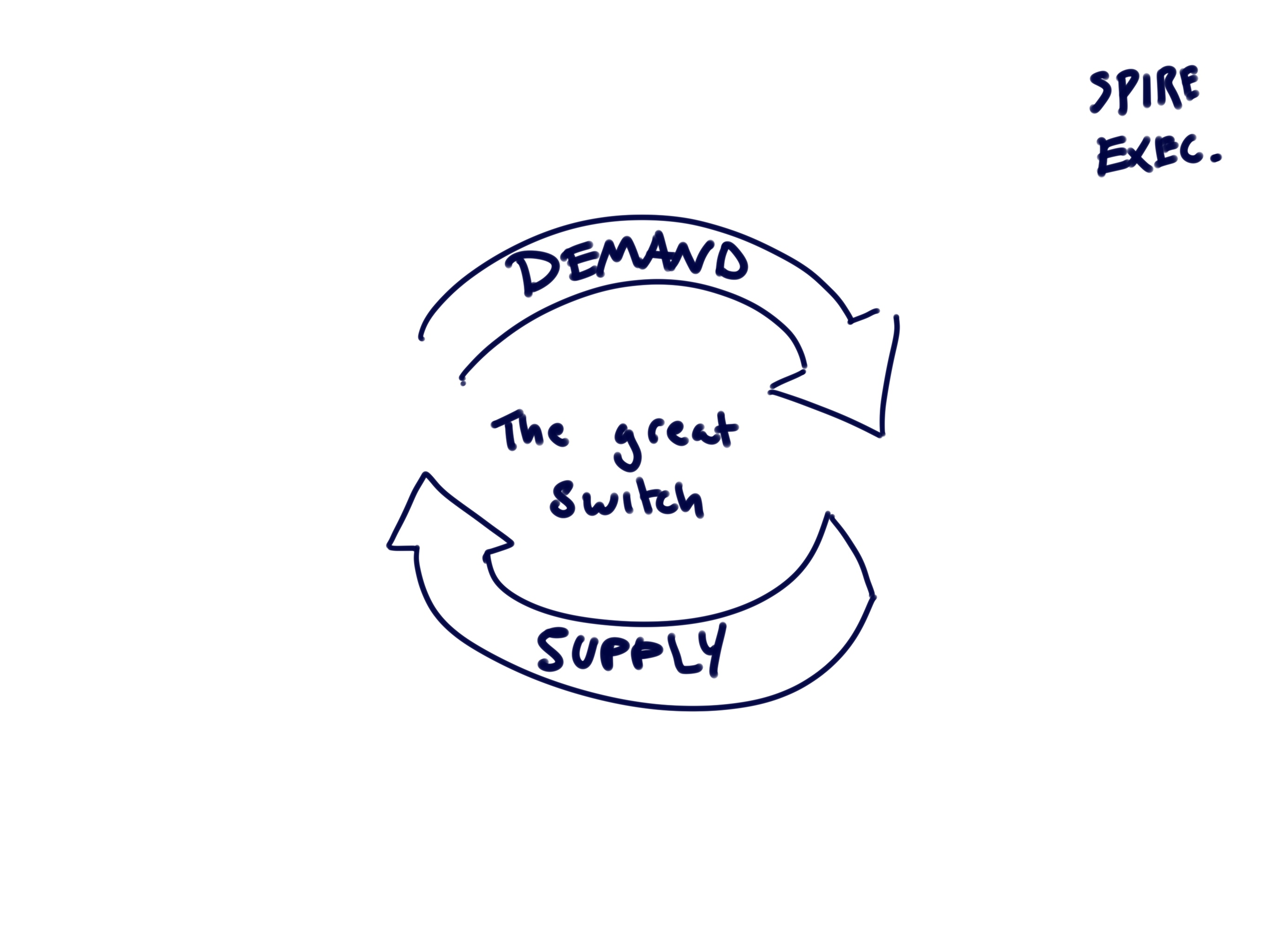 Spire Deep, When Demand & Supply Switch in the Talent Realm

Any time opposite roles reverse you have a hard to measure ripple, 2020 marked the year of the great switch. Demand and supply have taken to wearing one another’s costumes, but the quality of acting is in no way at the same standard.

There has always been a demand for good people, but the Wild West of hiring in global sourcing has been long gone and the marketplace hierarchies that existed in 2019 have all but vanished. The supply of talent is vast and is growing by the month, it exists like a body of water next to a desert coastline. The camelback rider sees water water everywhere, but not a drop to drink.

Organisations are well equipped to play both the role of chasing scarce supply as well as the role of the source of demand, talent on the other hand wears the oversupply costume poorly. The stage is set, the band is playing and the tune is menacing.

Reacting to a dramatic oversupply in talent is simple on the surface, riding on the waves sitting in the crow’s nest (credit my buddy Benson for the imagery, ahoy!) the mind sees just the tip of the iceberg and in split seconds the hull is crippling against 1 million tonnes of Arctic ice. 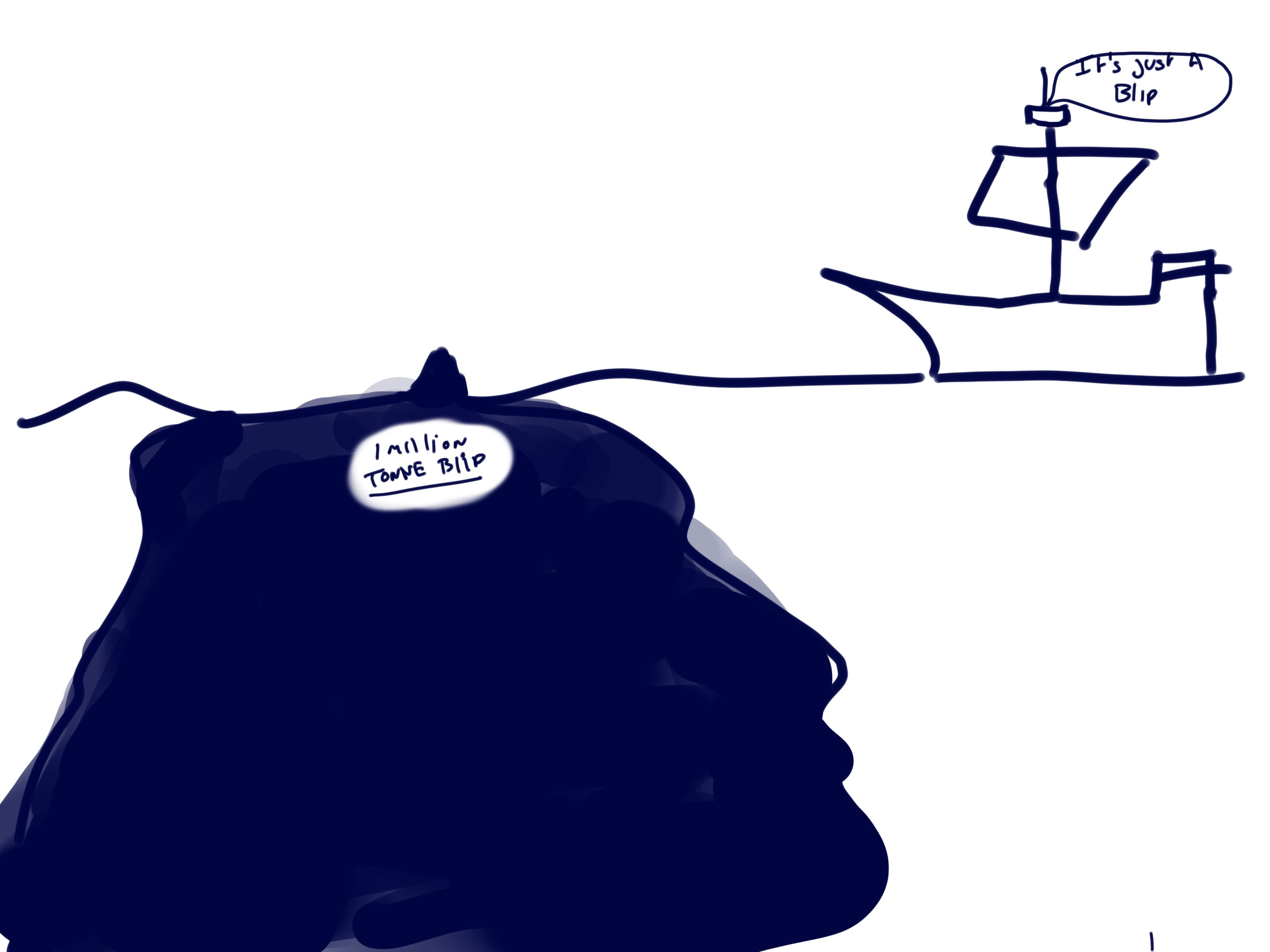 The ripple effect complicates the many layers to the onion and we’ve just peeled past its skin.

The pandemic is the CFO’s & Procurement’s friend

Many a finance or procurement leader can be credited for tying us to the life raft through last year’s storm, our collective grips on the side of the boat were strengthened through prudent financial planning & cost-oriented decision making. The axing of highly discretionary budgets has been necessary, but the threat in the waters ahead is the talent deal to be had.

Opportunities are scarce and talent bargaining power is all but gone for those who’ve been caught in covid’s crossfire. The opportunity to undercut and take the stance of “you need me more than I need you” is more prominent than ever. This isn’t out of malice, but rather rationale. An uncertain future puts the squeeze on every dollar committed.

What’s worse is that getting over the finish line matters more than ever and there’s a subconscious trade-off between taking the deal and thorough thinking;

Income security is at the top of the rationale pile. Survival is the greatest engineer of adaptability as well as flexibility.

We’re inundated with resumes, inflation rates are at an all-time high. CVs are data points without standardisation. Lists of several dozen applications can turn into several hundred and the human psyche isn’t conditioned to interpret this oversupply.

We’re attracted to exclusivity, we always want what we don’t have. Two of the greatest fallacies in employment conditions right now are LinkedIn’s authority and the job market;

#1. The marketing from LinkedIn of the “passive candidate as the best candidate.”
#2. The value placed on working for large brand name employers. The better the brand the better the talent/ opportunity. This is only a half-truth, don’t discount talent from the no-name employer.

If not with resume’s then with what. Testimonials. The walk behind the talk.

The resume is overrated, but the act of sending your resume is generous. Behind that document is someone putting themselves on the line, opening up for feedback and evaluation. Evaluation is… your time spent, but if you find your inbox on the receiving end of an individual don’t react, respond.

Cease to look at this transactionally and if someone’s taken the effort to script a message for you, they’ve been thoughtful about knocking on your door. It may have been the wrong door or the wrong time, but invite them in for tea. Ignore the door to door salesman, because they’re planting the same message everywhere and seeing what sticks.

It all tastes the same

Good is talent widely available. With a growing oversupply and dwindling hiring resources we’re threatened by an ability to forget good taste. Unlike your pallet which grows more knowing about fine wines the taste pallet for talent in today’s market is in danger of loses its senses, like the taste buds of a smoker on 3 packs a day.

The power of the CV is dwindling.

Complacency sits at the core of incompetence because now companies may not have to work as hard for talent and because now organisations have seemingly more options than ever before. Mindsets right now are like the gecko’s tail. If you cut it off, it’ll grow back.

So we take the foot off the gas, why go 150% when there aren’t roles to be hired, heck we’re worried about our own job security right?

Wrong… When everyone shores up you double down.

Fight extra to have that person on board, even if it is easier than ever to pull fish from the pond. It needs to be all about building empathetic equity and your organisation will benefit from reciprocity like never before. Whenever someone new is coming in you’ve got a window of motivation like never before, harness that wind because it blows strong. 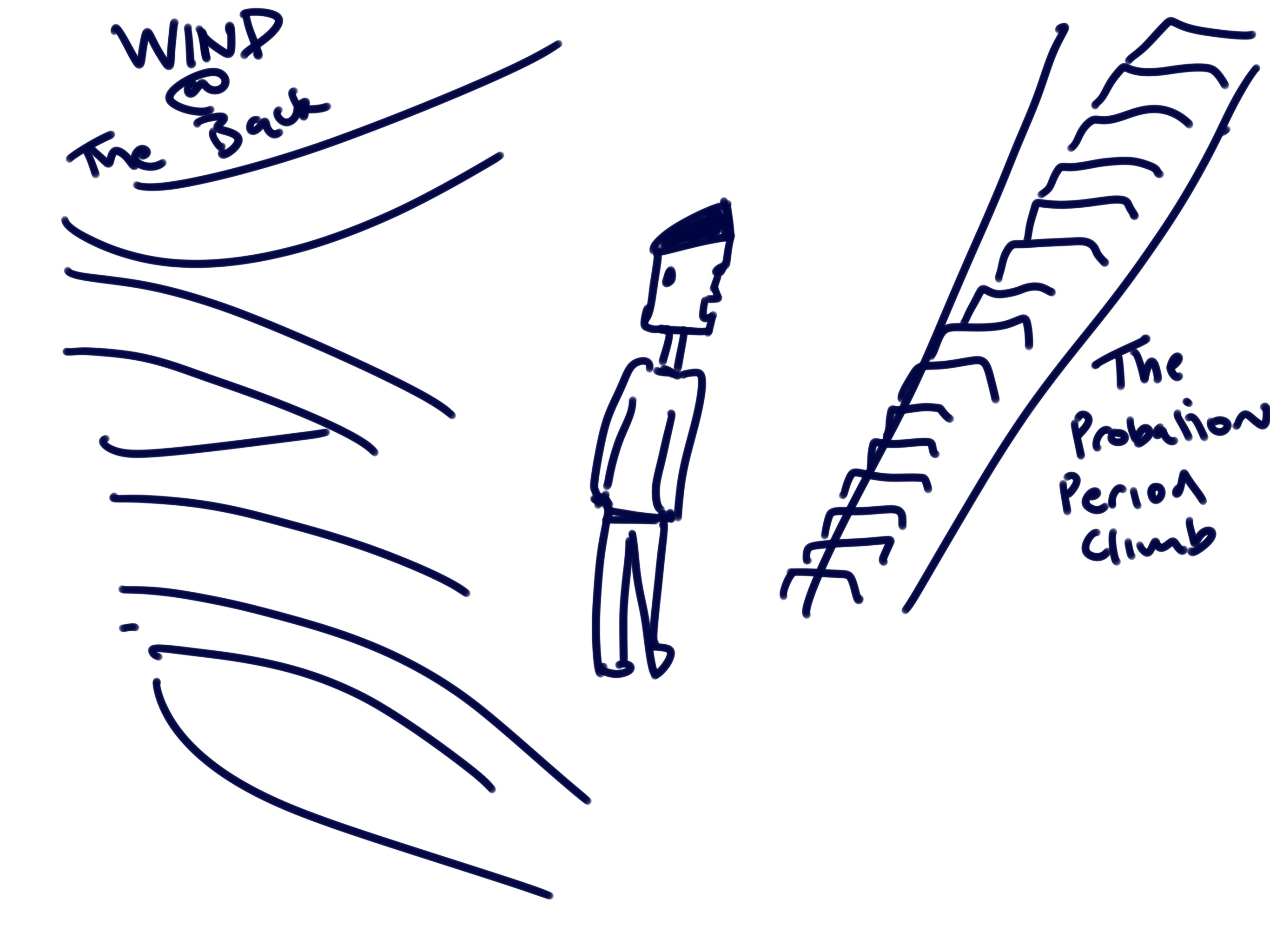 The threat to respect

Respect takes time, it takes effort. It requires consciousness. There exists no incentive to answer the cold email other than respect. A respect for the other person and to paying it forward.

The balance between employer and the talent in need shifts from eye to eye and toward a downward perception, we’re at a threat of losing empathy. Because reciprocal value is no longer clear. A first favour is acceptable, but the second and third-get tiresome. We begin to ghost that ask, signing out emotionally.

Before you know it we begin to stop responding, we don’t answer the call and we don’t invest. Not because we’re ill-intended, quite the opposite. Because we no longer want to be the bearer of bad news, we desperately want to help, but our hands are tied. We can’t conjure jobs from nothing, we’re not magicians.

But we can create magic. With one word. Dialogue.

Because if you answered the phone or replied to an email from someone when they were in the middle of a battle you gave them the will to push to the next day. You protected talent. Because if we don’t have self-belief then talent is wasted.

We can alter market perceptions, we can build the brand and represent humanity in the face of the fire.

Being long-term is commercial. Strike a conversation for 30 minutes today, build an advocate for infinity. Signals spread, unfortunately bad signals spread faster than good ones.

It’s within our own interest and our company’s interest that we create positive signals in the world.

My industry is a service one. If it was meant to be transactional then it would have been microsofted by now. Service means being there for the good and especially through the bad.

Giving good feedback is a piece of vanilla cake. At a surface level, we’re incentivised to do it.

Don’t measure by the successes. Measure quality on the feedback of the people who didn’t make it across the line, those who didn’t make the interview, who called in looking for support and never received a response. Because those on the receiving end spread the word.

If your talent partner comes at you with terms locking you in exchange for lower service fees send them packing. The best type of lock-in isn’t on paper, it’s a relationship lock-in. The one that cages you in is the insecure one.

Oversupply affects your own four walls

Friends are asking friends, strangers are asking strangers. Your people are your biggest asset and they’re being asked for help. The noise of the market is affecting your culture, negativity seeps in and winning mentalities are under threat. 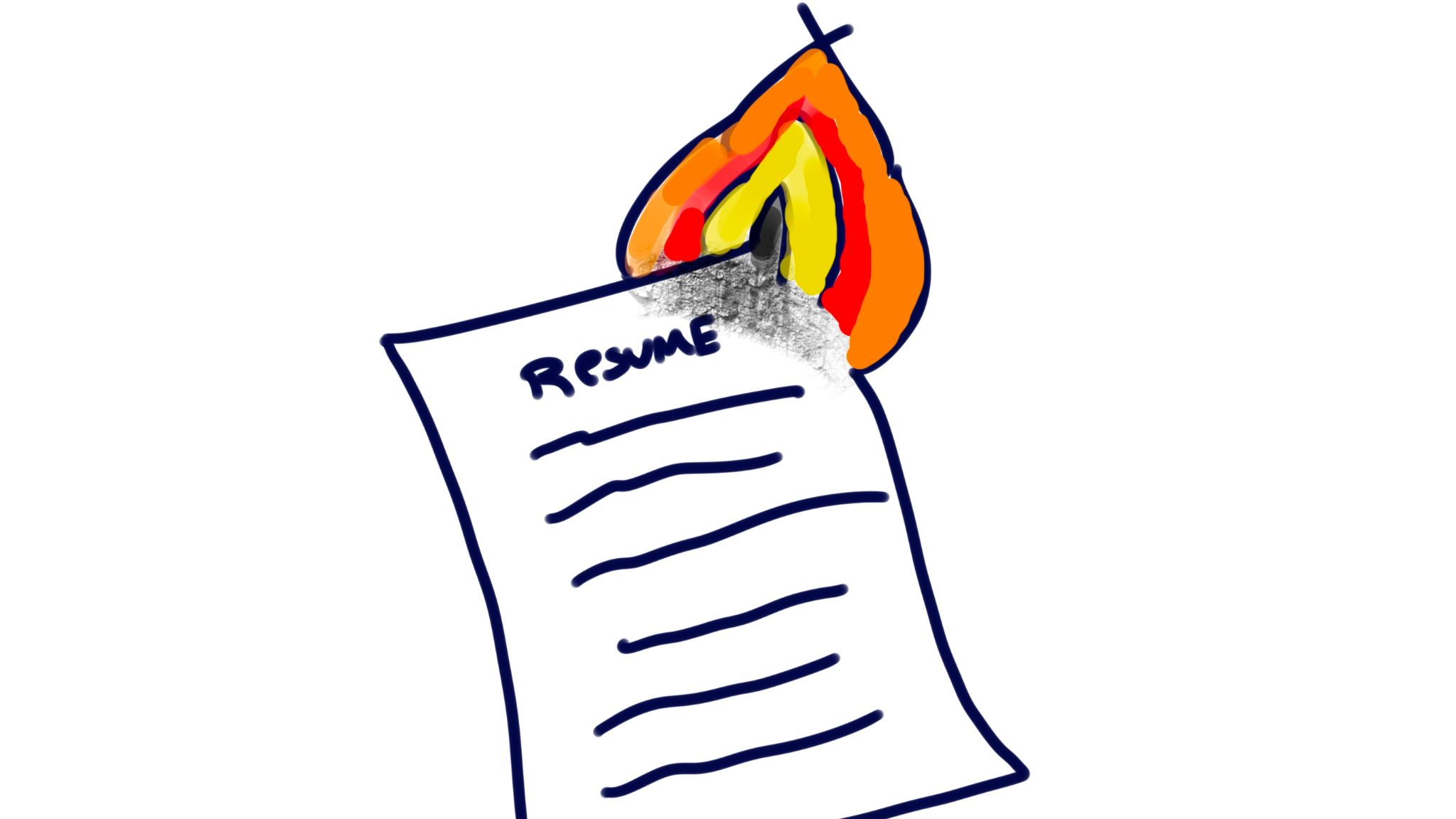 In the great depression burning money was the cheapest source of heat.

I alluded to earlier this week… resume’s are overrated it’s the story behind the paper that carries real weight. We don’t want to hear why you left this job and that job, we want to find inspiration to drop the jaw in awe. Unfortunately, the resume doesn’t capture powerful moments.

A VP of design and I discussed his pitch to be the brand behind athlete uniforms in the 2008 Beijing Olympics, which he subsequently won. Everyone has their own version of an Olympic pitch.

Don’t just take my word for it on resumes, here’s Seth Godin answering my pre-recorded question about the overinflation of the resume. Skip to 27 Minutes & 45 seconds in

“Knowledge is power”, you already know that one. You meeting with the talent doesn’t have to be just about you serving them, there is short term gain for both. Information gathering is acceptable as long as you ask kindly and with your hands on the table. There should always be an exchange of value.

Two weeks ago the announcement of VF’s shift out of Hong Kong unfortunately further contributed to an oversupply in the talent pool. We are just starting what will be a long year ahead, now is the time to get ahead of the game and to respond. It’s in our collective interest

Have a great weekend and keep it radical.
Rich